Walking into Target Field downtown Minneapolis on Wednesday, April 25, you were greeted by dozens of vendors who spent the evening before setting up large, eye-catching video displays and neatly arranged, interactive booths.

Manufacturers from varying specialties brought to AVI LIVE everything from razor-thin video displays to powerful laser projectors and speakers that attracted quite an audience. The show floor ran from 8 a.m. to 5 p.m., with keynote speakers in the morning and afternoon, and breakout sessions throughout the day.

In the morning, AVI  Systems CTO Brad Sousa spoke to a full house about "The Best UC Idea Ever!" He focused on a growing challenge that many industries are facing today -- providing technology solutions for four generations in the workplace. Sousa explained that one of the biggest answers to this widespread issue of adoption centralizes around "a different mindset," rather than the newest gadget or device. 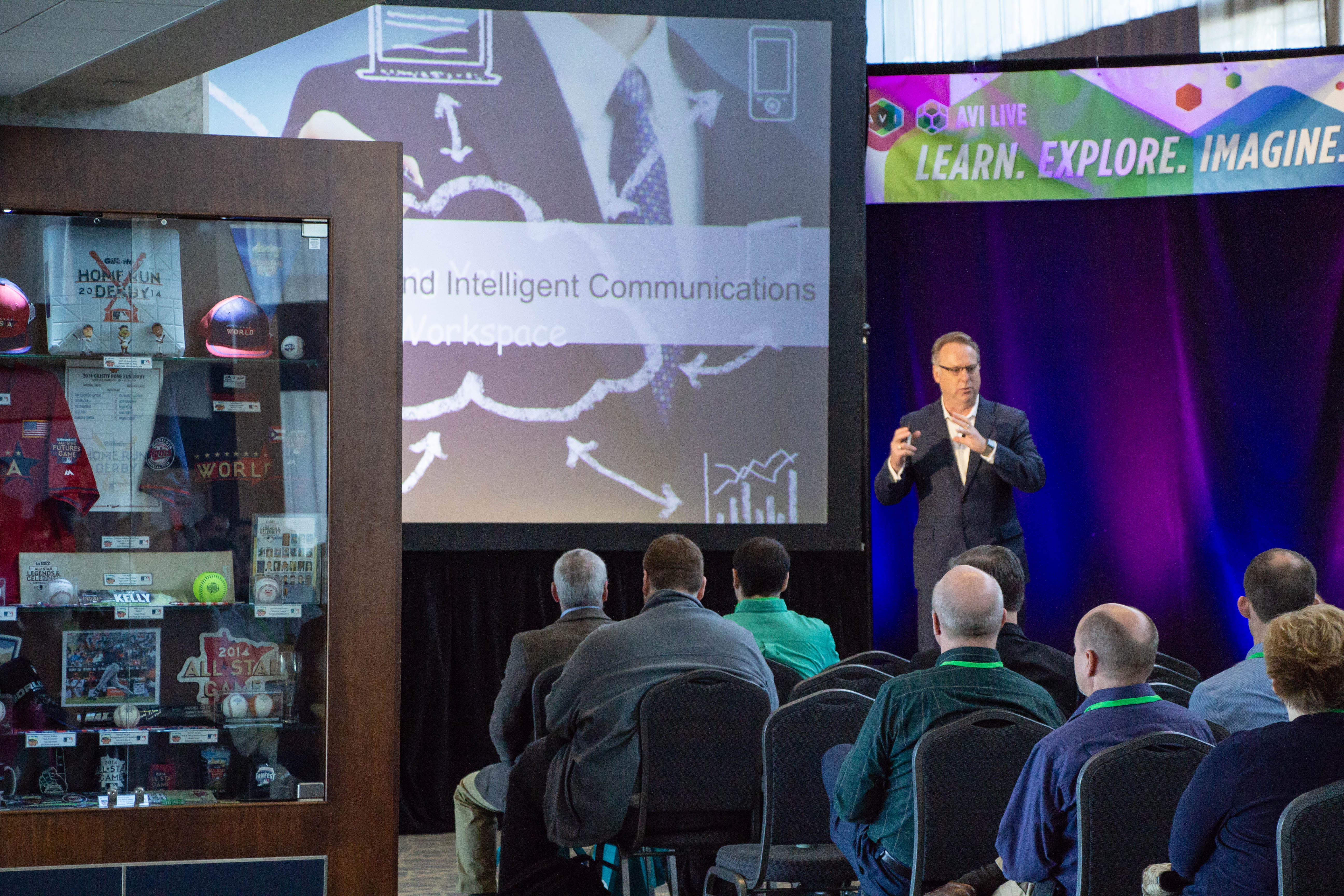 Digital Media Practice Manager Craig Frankenstein spoke in the afternoon about the production, consumption, and evaluation of data in today's world. At every turn, data is being produced by people, which is then consumed by others at an increasing rate. What's does all this mean? Frankenstein said, in part, that it's a tool to be used. It shows greater insight into how people choose to spend their time and energy.

ICYMI: Brad and Craig's keynote speeches are on our YouTube channel.

In between keynote speeches, attendees could jump into one of six breakout sessions that earned them AIA or CTS credits. Other sessions covered timely topics, like the FCC's change in regulation regarding microphone frequencies. Check out the full schedule here:

Outside of the keynotes and breakout sessions, there was much more to be seen and experienced. As you walked by the 573 Club in Target Field, you were instantly immersed in the show.

You could see people operating video cameras from a computer, simulating remote control. Others crowded around Barco's giant video wall that flashed quick clips of live concerts abroad, crashing waterfalls and more -- the clarity of which was striking.

Some vendors, like Bose, attracted an audience with their impressive speaker setup. At Shure's booth, you could take a seat at an interpersonal, on-the-go conference table to test out audio quality, donning a pair of over-the-ear headphones.

Passing by the booths, it was hard not to stop and admire the cool gadgets or get wrapped up in a funny moment from movies like the "Incredibles 2" that showed on displays or from projectors.

Neat devices and flashy technology aside, though, you could see that people were engaged because it's not every day you have dozens of manufacturers lined up to tell you all about their products -- a convenience that gives some the chance to finally see what's going into their building, studio, hospital or university.

“It’s almost a trade show mixed with a customer user group of sorts,” said Muriah Keith, inside sales and marketing specialist at Dascom Systems Group, an affiliate of AVI Systems. "For a customer, it’s a neat experience of a hotbed of everything that’s going to go into their site."

Attendees had the chance to dissect audiovisual systems and learn about the individual components. It's a way to look at each piece of the puzzle independently to see how things interoperate. “It’s a great place to come to look at each portion of it to see how it fits together," Keith said.

Marty Doll, a communications coordinator with the city of Burnsville, a client of AVI Systems, said that it gave him the opportunity to meet with vendors one-on-one in a way that didn't take too much time away from work or eat up his travel budget.

“You know, it’s a really cool event,” he said. “I think for me, specifically, not being someone who would typically travel to a NAB or some other trade show with limited budgets working for city government, it provides us an opportunity to be able to see some of that equipment, see it in use, talk to some of the vendors putting it on.”

Doll met Systems Sales Engineer Renea Dalton at AVI LIVE. Doll and Dalton, who works for AVI Systems, have worked together on different projects for the city. In a small group, they went around talking with vendors to see different technology that could meet the city's needs.

“I’ve had a great time," Doll said of the show. "There has been a lot of cool equipment, I've seen a lot of neat things -- some of this stuff way over my head, but you know, you’re seeing technology at its latest and greatest.”

The average age of public school buildings in the United States is nearly 50. And while the 1970s and 1980s certainly had their charms, the

It’s been more than two years since the pandemic disrupted how organizations of every size work and stay connected. Most companies adopted