Over 700 Employee-Owners, Creating Better Outcomes for Our Customers

We’re not satisfied with the status quo, nor are our customers. We invest in the development of our people, always striving for better. Our goal is to move beyond where integrators have traditionally lived—focusing more on outcomes and moving our clients’ businesses forward.

The employee-owners of AVI leverage unrivaled technical experience, talent, and commitment in delivering customized solutions that empower you to seize opportunity and imagine new possibilities.

Founded in 1974, AVI has grown from humble beginnings into the largest global audiovisual services provider – serving customers around the world. As an employee-owned company, everyone who works at AVI has a stake in your success. We hold ourselves to high standards and commit to delivering exceptional work to our clients. We do this while holding ourselves accountable to our core values of integrity, elevation, curiosity, oneness, and stewardship.

Together we design your solution from the ground up. And before your system is installed, we validate it by building and testing it at one of our Enterprise Deployment Centers. With more than 25 locations in the United States, and the ability to operate in 164 cities in 50 countries, AVI is the largest global audiovisual services, provider. You can count on us to deliver.

To learn more about our global footprint, click here.

Join our 100% employee-owned company where everybody has a stake in what makes AVI successful. There is a shared sense of accountability and integrity that helps propel the company forward. The benefits of our community-minded culture come to employees in the form of profit-sharing, 401K with matching, and employee stock options.

Elevate your career and join AVI. View openings across the country today. 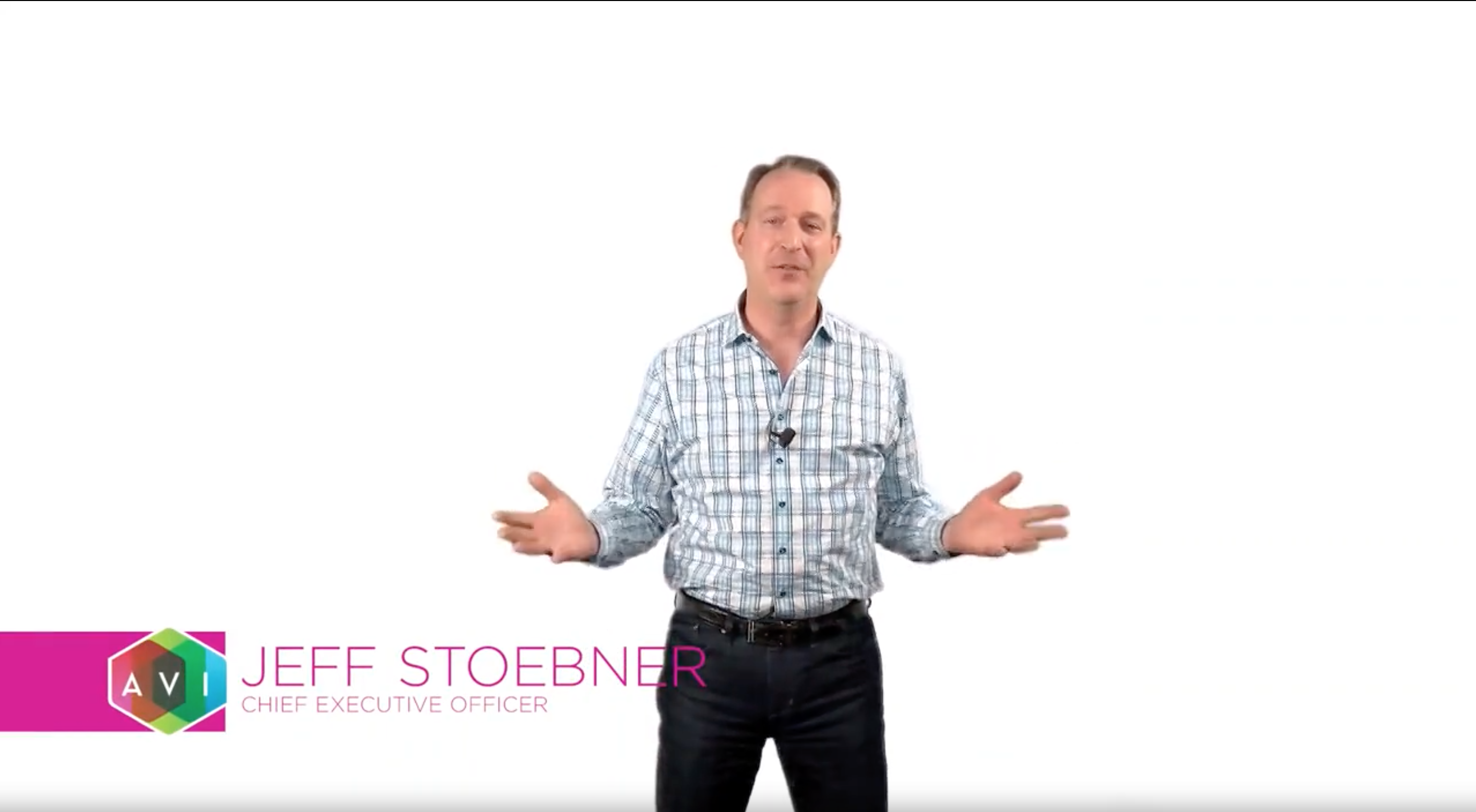 FOCUSED ON THE FUTURE

Just as we design our AV solutions to last, we’ve built AVI for the long haul — laying a financial foundation strong enough to weather volatile markets; investing in systems, infrastructure, and personnel; and by making AVI a 100% employee-owned company.

Our focus on stability, transparency and shared success not only provides security for the future, it’s the ultimate warranty for our customers.

“I am focused on building a truly great company that will continue to be truly great when I leave.” These are the words of AVI Systems founder Joe Stoebner, who started our company in Bismarck, North Dakota in 1974 as an audiovisual equipment supplier. In 1979 Joe bought out the other four shareholders and became 100% owner. The steady growth of the company was spurred forward with strategic acquisitions and expansions. Since 1986, ten acquisitions and three expansions have occurred.

Jeff Stoebner joined AVI Systems in 1993. He learned the ropes by working first in technical services, then becoming a sales representative. He also spent time as a Regional Vice President, as well as AVI’s Vice President of Marketing and Chief Operating Officer. As President and CEO since 2009, Jeff is responsible for the overall planning and direction of AVI Systems.

Brad leads a team of practice managers, technology leaders, and enterprise architects to strategically align AVI’s lines of business as we grow. A consistent voice of technical leadership in audiovisual, unified communications and digital media, he draws on over 20 years of experience in AV and network systems implementation – primarily on enterprise-based systems in healthcare, education, global corporations, and the Department of Defense. Prior to joining AVI in 2008 as regional vice president of the West Coast region, Brad served as CTO and Vice President of Sales/Marketing for Integrated Media Systems, National Director of Digital Media for MCSi, and COO/Managing Director for Icon Networks.

Roger joined AVI in April 2021 as Executive Vice President where he focuses his efforts to further develop the company’s operations in North America. He shares his 25-plus years of industry experience with AVI’s senior leadership team and also provides oversight of the company’s 20-plus branch office locations. In addition, Roger plays an instrumental role in identifying growth opportunities for AVI. Previously, Roger directed the growth of a major systems integrator where he served as a Chief Operating Officer. He grew that business from a $40 million regional provider with 100 employees to a $350 million global provider with more than 900 employees. He also expanded the company’s service area in the United States to include all of Texas, as well as the Midwest, Rocky Mountains, California, and northwest regions of the United States. Roger has held management roles as chief financial officer, director of managed services and in operations.

Christopher Mounts, CPA, started as AVI’s first Controller for four years before being promoted to Chief Financial Officer in April 2019. He now has executive responsibility for accounting and finance operations, financial reporting, strategic planning and analysis, and regulatory compliance. Chris ensures the company is growing profitably while maintaining the ability to invest in future growth.

Prior to joining AVI Systems, Chris was the Senior Vice President of Corporate Accounting from 2014 to 2015 at Houston-based Cardtronics, Inc. Before his time with Cardtronics, Inc., Chris was the Vice President of Finance at Layne Christensen Company after spending more than five years as the Assistant Controller. Chris started his professional career with KPMG in Kansas City. Throughout his nearly 20-year career, Chris has established a reputation as an operations partner and an expert in financial systems.

Outside of work, Chris supports many philanthropies and nonprofit organizations, including Children’s Mercy Hospital Cancer and Autism Research, Kansas City Young Audiences, and the Nelson Atkins Museum of Art.

The functional leader and voice of sales within AVI, Donald Mastro sets priorities for key development areas, leading the regional sales teams in advancing our sales agenda. He builds capability for sales analytics, establishes market and team performance standards, and oversees proposal responses and client presentations to drive efficiency and professionalism within our sales force. He also grows sales bookings overall, guides the onboarding of new sales talent, and develops a range of sales management functions.

Our technical experts boast impressive credentials, enabling them to see the big picture with sharp vision and helping to ensure that no details are overlooked. Credentials Include:

AVI enables our customers to take full advantage of today’s communications technology through our subsidiary companies: Magenium and Dascom. These companies have capabilities that complement and extend our own, enabling your business to communicate and collaborate more effectively.

We are authorized to integrate and service products manufactured by the world’s top providers, including Sony, Crestron, and Microsoft. This allows us to provide the optimal solution for each customer. It gives you one point of contact for maintenance, repair, and replacement of any component of your technology ecosystems.

TALK TO THE EXPERTS

Increased productivity and tangible ROI don’t have to be pipe dreams!