You don't need to look at the most recent US Census Bureau figures to know that Austin, Texas is a high-growth city. However, what you may not realize is what's behind Austin's explosive growth.

Hint: it's not live music and craft beer.

Austin is known for having a fantastic quality of life, excellent schools, outdoor recreation, and access to top talent. It's also known for being highly entrepreneurial with a pro-business climate, making it a haven for high-tech companies and venture capitalists.

Austin's immense growth started during the 1990s leading up to the first dot com boom. Over time, the city became a magnet for high-tech industries, ultimately becoming known as "Silicon Hills."

Then, the Austin metro swelled by almost a third and added over half a million residents to become the fastest-growing large metro in the United States from 2010 to 2020.

And it didn't stop there.

The population increased to an estimated 2.2 million people as of July 2021 – a 3 percent increase from the previous year. This means Austin has the fastest population growth among metros with at least 1 million residents.

Although we've had a strong presence in Dallas since 2004, AVI recently acquired Onsite AV to serve more companies in the Austin market.

We chose Onsite AV because it's been part of the Austin community for 18 years. Owners Shelly Cox and Karla Samaripa witnessed the area's explosive growth and dialed into the area's unique audiovisual needs.

In addition, Onsite is a known quantity within the Austin community, after building hundreds of trusted, long-term client relationships with local business leaders.

Jeff Stoebner, CEO of AVI, says: "Combined with our existing employees in Austin and the additional resources we can bring to the business, I'm confident we'll quickly grow to serve a diverse customer set in the Austin-San Antonio corridor." 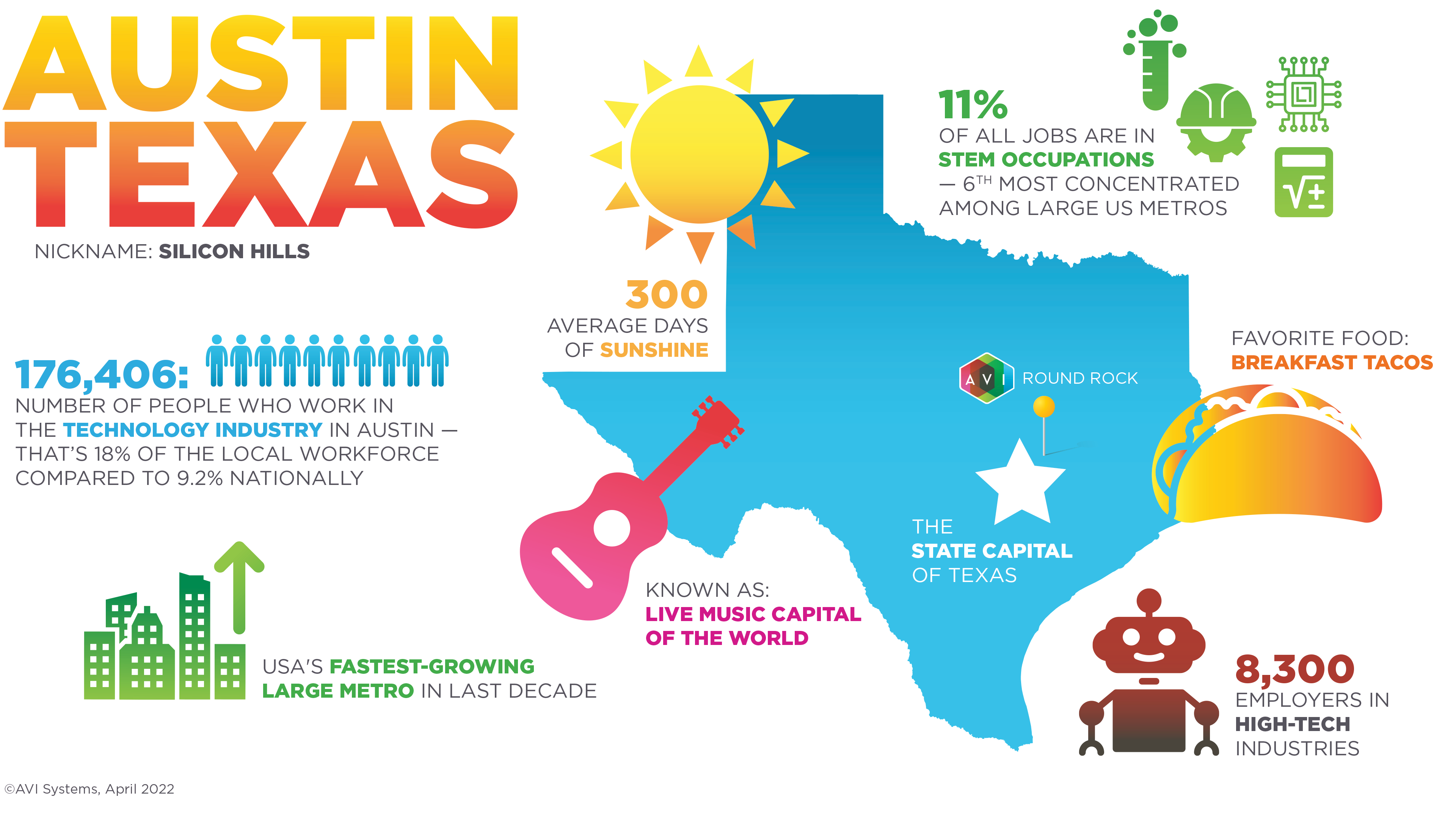 As an audiovisual and next-gen visual collaboration provider, there's a tremendous benefit to expanding into a high-growth market like Austin.

Consider that more than 8,000 employers in the Austin area classify themselves within the broader high-tech industry. This means hundreds of thousands of employees in the region need ways to meet, collaborate, and communicate effortlessly – whether they're working in software, R&D, biotech, semiconductors, or any other sub-niche within the high-tech industry.

These employers and their teams are, in many ways, a proving ground for what's next in terms of hybrid work technology and the future of work.

Onsite AV's co-owner Karla Samaripa says: The AV industry is one to watch because it's so instrumental in enabling hybrid work, helping organizations communicate their messages and enhancing productivity."

By looking closely at what's happening in the Austin market, we're positioned to identify where trends will head in the next few years. Then, we can share our insights with companies in other locations as they make decisions about their large tech-related purchases.

If you're in the Austin-San Antonio corridor and want to partner with a systems integrator, let's talk. We offer audiovisual, broadcast, digital media, managed services, and unified collaboration solutions for enterprises and small to mid-sized businesses.

Hybrid Meetings: Benefits for the Enterprise

Hybrid meetings have changed how we view communications and collaboration in business environments. For large enterprise organizations, it