AVI Systems AVI Systems
SHARE IDEAS EFFORTLESSLY
Propel your organization forward with collaboration solutions that free you to move at the speed of thought.
TAKE CONTROL
Manage all your communication technology with integrated monitoring and reporting.
THE TOTAL ANSWER
No matter how complex the need, AVI provides comprehensive communication technology solutions.
CONNECT TO YOUR WORLD
Expand your reach with meeting room solutions that enable easy communication across the world.
INDUSTRY-SPECIFIC SOLUTIONS
AVI Systems provides specialized audiovisual and collaboration solutions for all major industries.
SEIZE THE ADVANTAGE
Move faster. Compete more effectively. AVI solutions for business are catalysts for growth.
REACH EVERY LEARNER
The world becomes your lecture hall with solutions tailored to the needs of educational institutions.
EXTEND YOUR REACH
Money knows no borders, nor do the communication technology solutions we can bring to your entire organization.
LEAD A HEALTHCARE REVOLUTION
Extend your reach to patients, providers and partners regardless of location.
HELP GOVERNMENT WORK HARDER
Access communication technology solutions that make government more efficient and responsive.
PROCLAIM THE MESSAGE
Harness our power to help reach people far beyond your physical space.
ENHANCE THE EXPERIENCE
Create more powerful, vivid and immersive experiences across the realm of entertainment.
A COMPANY UNLIKE ANY OTHER
United in our mission and guided by shared values, employee-owned AVI Systems has become a leader in our industry.
AN ACCOMPLISHED TEAM
Led by industry veterans and visionaries, AVI System has become one of America’s preeminent communication technology providers.
AVI’S GREATEST ASSET
Extraordinary expertise meets uncompromising commitment in the employee-owners of AVI Systems.
YOU COULD SPEND A CAREER HERE
AVI provides an environment in which every member of the company has the opportunity to learn, grow and succeed.
JUDGE US BY THE COMPANY WE KEEP
A pillar of our success: longstanding partnerships with the industry’s premier communication technology providers.
MORE POWER TO YOU
See how our growing family of companies keeps AVI clients on the technological forefront.
A PROVEN PROCESS
AVI Systems delivers communication solutions via a step-by-step, collaborative process tailored to your unique needs.
A FOUNDATION FOR GROWTH
All AVI solutions are built on a solid bedrock of understanding.
THE POWER OF COLLABORATION
By involving our clients at every stage of the design process, we create solutions tailored to your unique needs.
PROOF OF SUCCESS
Before we install your solution, we rigorously test it to ensure its functionality and reliability.
WE’RE HERE FOR YOU
AVI Global PRO Support ensures your technology performs as promised, day in and day out.
STEP-BY-STEP TO YOUR SOLUTION
Before we begin work, we provide a detailed scope of your project.
SERIOUS ABOUT SUPPORT
Responsive, reliable and flexible, AVI Global PRO Support ensures you get maximum value from the solutions we provide.
ACCESS OUR EXPERTISE
We don’t just provide solutions, we have the resources to keep your system up and running long after installation.
CONFIDENCE FOR THE LONG TERM
AVI provides coverage that extends far beyond manufacturers’ warranties.
STAY CONNECTED
Count on AVI for real-time support to keep your conferencing technology functioning.
THE ULTIMATE STAFFING RESOURCE
In addition to providing the technology you need, we’ll help you build a team to run it.
DELIVERING ON THE PROMISE
We not only prove your communication technology solution. We pre-prove it in the AVI Interoperability Lab.
MARK THE DATE
We participate in a range of industry events and regularly hold our own. You’ll find the latest listings right here.
DISCOVER WHAT WE CAN DO
Browse our case studies for real-world examples of how AVI helps our clients get the most out of today’s communication technology.
ACCESS OUR INSIGHTS
Stay up-to-date on AVI and the industry we lead. Visit our blog page, or receive our latest posts via email.
SHARPEN YOUR VISION
View a wide range of videos on news and events spanning the world of communication technology.
GO DEEP
Take advantage of our sophisticated search function to zero in on the content you need.
SHARE IDEAS EFFORTLESSLY
Propel your organization forward with collaboration solutions that free you to move at the speed of thought.
MASTER THE TECHNOLOGY
Count on AVI for broadcast media solutions that enable you to manage and share digital assets more efficiently than ever before.
SOLUTIONS ON A GLOBAL SCALE
Access a unique business practice created from the ground up to enable your business strategies.
CONQUER THE DIGITAL FRONTIER
Communicate with unprecedented power and immediacy in a vast range of applications.
EXTEND YOUR REACH
Money knows no borders, nor do the communication technology solutions we can bring to your entire organization.
AVI Systems AVI Systems

BlogLooking Back on 40 years with Chairman Joe Stoebner

NOW YOU'RE PLUGGED IN.

Welcome to the one blog for all things AV-related. 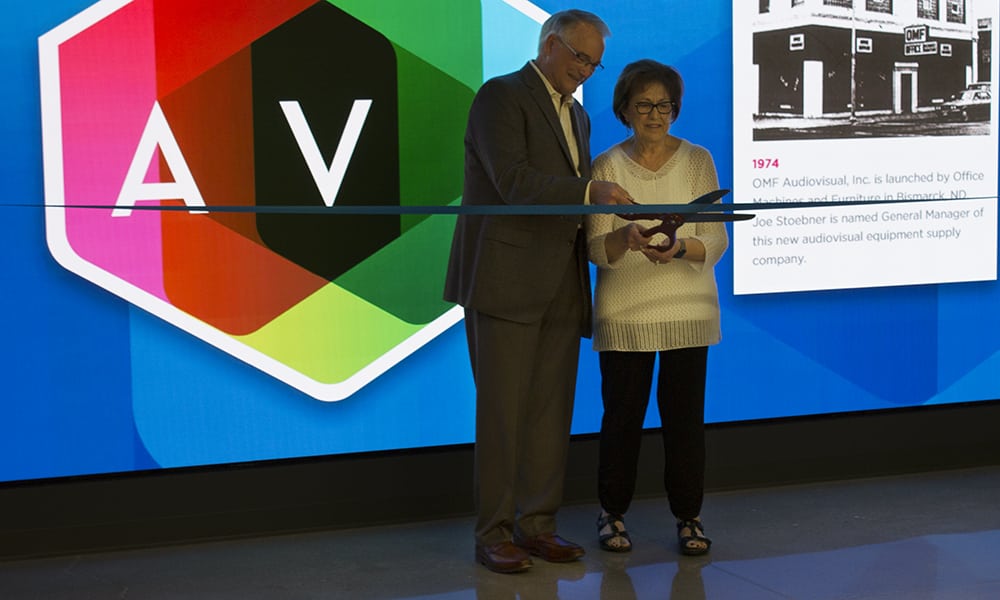 Looking Back on 40 years with Chairman Joe Stoebner

As we celebrate AVI’s 40th anniversary, it’s the perfect time to take a look back at our formative years and honor the significant influence our founder and Chairman Joe Stoebner played in creating the company we’ve become today.

As we look back, it’s clear that Joe’s upbringing instilled in him values that laid the foundation for the kind of company AVI would become. It’s also clear that these values will continue to guide the company as we grow over the next 40 years.

Joe Stoebner was one of nine siblings raised on a farm in South Dakota. By age 10 he was on a tractor helping his father and learning the value of hard work. His father served as a role model for both a strong work ethic and the importance of honesty.

At the time, farmers bought gasoline in bulk. If you used it for your tractor, the gasoline was tax-free, but if you used it for your car, you had to pay taxes. Joe’s dad was forthright and meticulously recorded every mile he drove in his car using bulk gasoline so he could pay the required taxes at the end of the year.

His mother’s generosity and responsibility also helped shape the person Joe became. You can see his parent’s influence in his decision to move AVI to an ESOP corporation.

Giving employees ownership in the company, just felt like the right thing to do. It spread the wealth and the responsibility. And as a result, AVI employees are more driven, hard-working, and personally invested in building a great company.

But it wasn’t always smooth sailing. Joe had to overcome obstacles from the start. After teaching history for five years, he made the tough decision to take a different career path.

During Joe’s first job interview for a sales position--at Office Machines & Furniture (OMF)--the owner told him, he wouldn’t hire a teacher with no sales experience. Joe didn’t take no for an answer.

He put together a sales proposal and convinced the owner to meet with him again. This time the owner hired Joe.

On Joe’s first day at OMF, his supervisor resigned. With no one to train him, Joe realized he’d have to teach himself to be a great salesman.

He asked a lot of questions of his co-workers, learning as much as he could, and after a year and a half, Joe was exceeding his teacher’s salary by three-fold. His perseverance and tireless work had paid off.

Joe rose to general manager at OMF and eventually bought the company from the owners' group in 1979 changing the name to Audiovisual, Inc.

The purchase was on a risky owner-financed contract that put Joe immediately in debt of $110,000, but it was a valuable lesson. Joe paid off the debt a year and a half early. Being financially frugal and paying off debt early is one of the reasons AVI is such a stable company with no current debts and is poised for future growth.

Being an ESOP corporation was just one of four significant decisions that allowed AVI to become the company it is today.

One of the most critical decisions came when Joe realized he couldn’t manage the company alone and offered Terry Daffinrud, then AVI’s CPA, the opportunity to be his business partner. This move allowed Joe to focus on sales and leave financial management to an expert.

Terry was the right person at the right time.  Terry came up with the ESOP idea and established it at AVI in 1989.  Many people have asked Joe why he literally “gave the company to the employees” through the ESOP transaction and he replied with these key reasons:

Succession Planning: It would provide a stable transition from Stoebner ownership to others without the disruptions of selling the business to other investors.

Shared ownership:  It would be a common goal for uniting a diverse group of employees from acquired businesses.

Tax Deferment: The tax law change in 1996 allowed S-Corps to sponsor an ESOP.  Tax liability flowed through to the shareholders, and ESOP’s do not pay income tax. As ESOP ownership increased gradually, more tax money was diverted to the AVI employee-owners.

Another crucial event in the growth of AVI was Joe’s decision to move his family from Bismarck, North Dakota, to Omaha, Nebraska in 1989. It wasn’t a decision he or his family took lightly, but Joe knew he had to do it. He had expanded the company and felt strongly that he needed to be present in the new market to properly oversee its growth.

The huge transition from being an AV dealer was taking on the challenge of helping ConAgra integrate its audio/visual communications system starting in 1988.

After parting ways with its audio and visual consultant, ConAgra asked AVI to design and build the project. AVI had done a great job as an equipment and service dealer but this was the first time the company had ever done any form of integration.

The job was a tremendous success and began the transformation of AVI from a dealer to an integrator of audio/visual technologies.

Decisions and events like these all test a company and its employees. Joe is proud of the company we’ve built together over the last 40 years.

But we can’t rest on our laurels. With new technologies and platforms being launched every day, it’s imperative to stay proactive and keep learning.

Joe is confident and optimistic about the future. He knows that we have the talent and the drive to take AVI to new heights in the next 40 years.

Complete this form to get the latest news, event information and technology tips delivered right to your inbox.